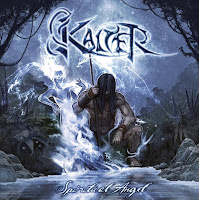 August 28 street date. ‘Spiritual Angel’ is a progressive, melodic death metal gem, that has astounded the connoisseurs of metal and critics worldwide. KÄLTER, a quintet hailing from Quebec City, draw from the influences of Scandinavian metal bands like Children Of Bodom, Kalmah, Wintersun and Norther, incorporating melodic power riffs, folkloric elements, strong use of keys, and the same style of harsh vocals as their peers. The 8 brilliant tracks on 'Spiritual Angel' depict Nordic mastery, whether powerful orchestrations like Dimmu Borgir, or heavy use of keyboards, like the splendid synthesizer solos worthy of Stratovarius. 'Spiritual Angel' is filled with beautiful arrangements ranging from magical guitar solos, brilliant lead keyboard work, progressive inventive drumming, and an epic performance from UNEXPECT's front woman 'Leilindel' on "Time Out of Mind." ‘Spiritual Angel’ is superbly packaged with a 12 page booklet, with lyrics, band photos, and album cover artwork by Nicolas Francoeur (Nordheim - "Lost in the North"). 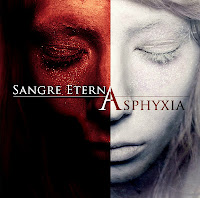 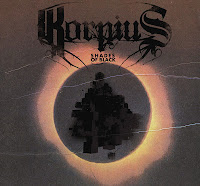 Now available. "Blackened Death Metal mob KORPIUS unleash a torrent of furious brutality in insanity form with their first step up the career ladder, namely their debut full-length album 'Shades Of Black' taking flight. Evidently sounding similar to Behemoth, this may be Quebec's (Canada) answer to the Polish titans. Blistering blastbeats encased in a multitude of cosmetic riffs and verifying vocals, savaging the atmosphere with a maple   syrup-laden knife. An exciting band with a bucket full of promising intention in every possible way, Korpius offer the way to the dark woods of North America." - Rhys Stevenson (Terrorizer Magazine - rating: 9/10). "Prepare thyselves for one of the best, intense, epic, blackened death metal debut albums in recent memory. This is just a beast of an album." - Lords Of Metal (nl) (rating: 88/100). Hailing from Sherbrooke, south of Montreal, this exciting quartet have already carved a name for themselves on the Quebec Metal Circuit over their short 5 year career, as a must see Live act. They have toured with Despised Icon, Krisiun, Belphagor and many more. Some critics have compared KORPIUS as on par with Neuraxis, Fleshgod Apocalypse and Cryptopsy. KORPIUS were voted as Best Death Metal Band in Quebec 2011 at WTF Metal Music out of 32 Bands! (Poll conducted in Feb. 2012 by the Fans). "Shades Of Black might even make your album of the year. Stunning metal." - Metal Team UK 2011. 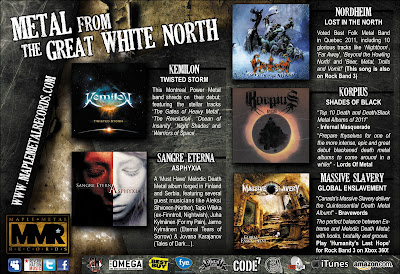 Ad Posted in DECIBEL Magazine & METAL HAMMER UK for the MAY 2012 ISSUES !!
Look for the Ad in METAL HAMMER right beside the DIO feature \m/
Click on the Ad to View it full-size. 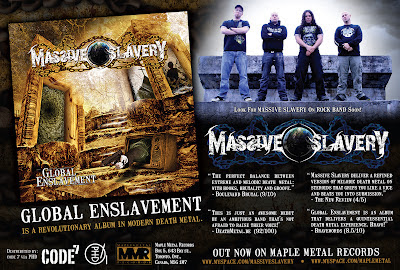 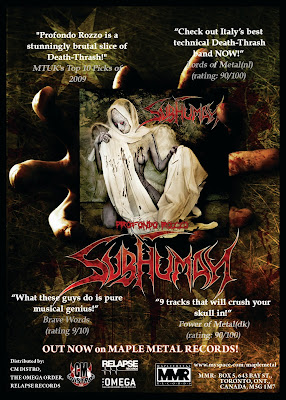 Posted by Maple Metal Records at 22:21

Email ThisBlogThis!Share to TwitterShare to FacebookShare to Pinterest
Labels: ALBUMS

KEMILON - "Twisted Storm" submitted to the Metal Category for the 2013 Canadian JUNOs!

Buy SANGRE ETERNA new single "Through the Waves of Agony"